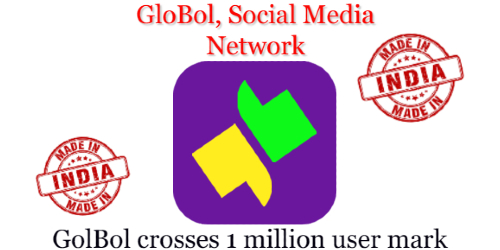 By: Alok Kumar Jha
In: News
With: 0 Comments
Spread the love

Incepted in December 2019, the platform was started with the aim to help people make relevant and meaningful connections in the virtual world based on similar interests, faith, kinship, occupation, and so on. Offering a safe space for people to master the art of expressing themselves, it allows users to share their experiences and thoughts, bringing a sense of belonging and appreciation for each other.

Available in Hindi, the app looks to bridge the existing gap of the negligible active participation of Indian users on other social media platforms and enable everyone to participate and connect. The app has a current rating of 4.9 on Google Playstore and witnesses over 50% of active users sharing content per day.

Speaking on the milestone, Shanu Vivek, CEO – GolBol said “We noted that despite cutting-edge technology, social media networks were not fulfilling their purpose to be inclusive and bring people together. We were motivated by this to create a platform that will allow meaningful engagement and connections between people. We are delighted to have garnered over 1 million users and hope to achieve more such milestones in the future.”

The app sees over 3 million likes being generated each month and contains more than 2 million images, all of which are user-generated content.

GolBol is a leading homegrown social network. Established in December 2019, the brand is aimed at helping people make relevant and meaningful connections in the virtual world based on similar interests, faith, kinship, occupation, and so on. To allow natural connections and easier self-expression, GolBol allows users to leverage pre-determined templates based on emotions, faith, love, family, festivals, stars, patriotism, trends, etc. The platform’s overarching goal is to build a social networking app for the 440 million ‘Bhartiya’ internet users.