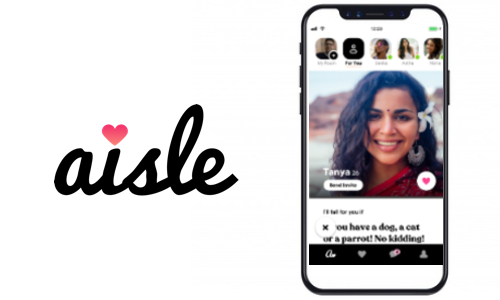 By: Alok Kumar Jha
In: News
With: 0 Comments
Spread the love

Aisle, India’s leading high-intent dating app, has announced the launch of a revolutionary new live streaming feature where users can interact-before-matching. This one-of-a-kind concept allows individuals to host a virtual ‘Room’ and begin an audio conversation with any other interested user. Through this exciting feature, users have the opportunity to form a connection through real conversations before choosing to match.

Once a host has created a Room, any number of users can join and wait for their turn for an audio conversation. All conversations that take place within a Room are broadcasted and can be listened to by any Aisle user. Each conversation between a host and a guest lasts for 5 minutes – after that, the host can either choose to match or to pass. Both parties are also given the option to end the conversation at any time with the ‘Pass’ button. Each participant is also shown a ‘fun and desi’ icebreaker in the form of a trivia question at the beginning of a call. Furthermore, to ensure the host’s privacy, no notification is sent when they create a Room. However, hosts do have the option to prevent people they’ve already matched with from seeing their Room.

The COVID-19 pandemic has forced the world to adjust to a new normal. Safety concerns and the restrictions on social gatherings have made casual meetings at pubs, restaurants, and other public venues an unlikely prospect. Through its newest feature, Aisle hopes to recreate this experience and give adults looking for meaningful relationships the chance to interact naturally in a secure, online environment.

“2020 has been a difficult year for everyone, and one of its many casualties has been offline dating. With most of us confined to our homes for the majority of the year, meeting new people and forming a connection has never been harder. And that’s why we’re thrilled to announce the launch of Rooms,” said Able Joseph, Founder of Aisle. “With the entire world forced to move online, we took this opportunity to revamp the core concept of online dating. Instead of trying to force a connection on the basis of a text conversation, users can now speak to each other just as they would if they met outside. Online dating has forever changed, and we’re proud to be at the forefront of this revolution.”

Rooms launched two weeks back, is a free feature available in Beta to a few selected customers only. It will be rolled out to the entire user base in Q1 2021. During this period, Aisle streamed over 10,000 minutes of conversations per day. This figure is expected to increase 20x by 2021. Each Rooms’ session was found to last approximately 14 minutes, with 70 per cent of men and 50 per cent of women utilising the feature.

Based out of Bangalore, Aisle is India’s market leader in high-intent dating apps, built for Indians by Indians. Designed for people of Indian-origin from around the world who are looking for serious relationships, Aisle has staked its claim to the middle ground between traditional matrimonial websites and casual dating apps. Aisle is uniquely customized for Indian sensitivities. Through its proprietary algorithm, Aisle empowers its users to celebrate their diversity by prioritizing results based on the things that matter most to them – from mother tongue to hobbies and interests. Today Aisle has acquired over 3 million users, 9 percent of whom are NRIs from across 100 countries. Aisle’s unique approach to romance has made it the fastest-growing dating app in India.

2020-10-21
Previous Post: FlexSalary launches FlexPay, credit-based ‘Scan Now & Pay Later’ feature
Next Post: How to use your smartphone as WebCam